There are multiple fault lines in South Australia; Willunga Fault, Hope Valley Fault, Clarendon Fault, Crafers Fault, Eden-Burnside Fault, Redbank Fault, Alma Fault and the Para Fault (as seen on the map below) which runs from Gawler, down to North Adelaide. This fault line is part of the Indo-Australian Plate, which encompasses the whole of Australia and India (refer to second image provided) and is also pushed up against the Eden-Burnside Fault, which is how the commonly known Hills of Adelaide are formed. The surface of this fault is mainly covered by human-made developments and infrastructure, such as houses, roads and buildings. 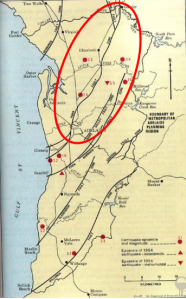 Major fault zones and earthquake epicentres in the Adelaide metropolitan
region up to the end of 1978. Red circle outlines the Para Fault Line in Adelaide, extending from Gawler down through Adelaide.

The black lines indicate where major fault boundaries are on Earth.